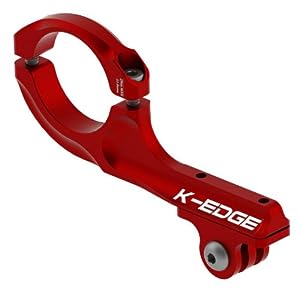 K-Edge started out making chain catchers for the  front mechs of road bikes, but have now diversified into other bicycle components, including a series of GoPro bike mounts which compete with GoPro’s own in-house line.

Beautifully machined out of 6061 aluminium, the K-Edge GoBig features a “boom” design that sites the GoPro out in front of the handlebar. A two-bolt clamp system attaches the mount to any 31.8mm diameter handlebar, but people have found they’ve successfully been able to adapt it to fit narrower bars by fitting the rubber shims left over from lights or other accessories (unfortunately, K-Edge don’t supply any in the box). Out front, the GoPro attaches by way of its standard  bracket onto the K-Edge mount, and is secured by way of an Allen bolt.

On the trail, the results are impressive. While GoPro’s own plastic mount has a tenancy to flex and even break, the K-Edge holds firm whatever the conditions, allowing you to get super-smooth footage. For those who care about aesthetics, it also much more attractive than the GoPro mount, and looks more like part of the bike rather than a plastic add on. You can even get it in three different finishes!

Downsides? The key one is price – at over $50, this is an expensive bit of kit. That said, it’s a lot less expensive than losing or damaging your GoPro during a ride (and anyway, can you put a pricetag on getting great footage?!) Some users have also complained about needing an Allen key both to fit/remove the bracket and the camera from the mount, but that’s probably necessary to keep everything good and tight, and most cycling multitools will the necessary tool to make any adjustments.

You can buy the K-Edge Go Big GoPro handlebar mount on Amazon here:

Here is a nice example of footage shot using a K-Edge mount:

By continuing to use the site, you agree to the use of cookies. more information

We use cookies to personalise content and ads, to provide social media features and to analyse our traffic. We also share information about your use of our site with our social media, advertising and analytics partners.